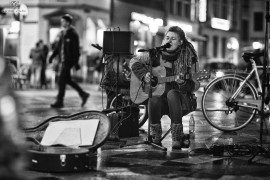 I often meet street photographers who refuse to shoot on the streets with an ISO higher than 200 because fear of grain. What may be a problem with this? Well if you are shooting with a high f-stop to get a deep depth-of-field (like f/8) your shutter speed will often be too slow.

How did the masters shoot their film?

Well in the early days of photography (late 1800’s to early 1900’s), street photographers were constrained by relatively slow films like ISO 25 film. But as technology advanced (and ISO 400 film became available) some legendary street photographers like Joel Meyerowitz and Garry Winogrand were pushing their ISO 400 film to 1200 ISO. This allowed them to shoot at the maximum shutter speed of the Leica’s they were using (1/1000th of a second).

A higher ISO adds grain and contrast. Not a lot of photographers like that. For me personally, even grain structure adds a peculiar charm, especially in my opinion it is suitable for street photography.

Don’t be afraid to shoot with ISO 1600 or even faster when you are shooting on the streets. It will better help you capture “the decisive moment”.