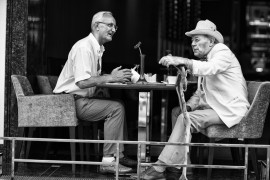 I have never been a fan of history (from bad memories of rote memorization in school). However I am starting to realize over time the importance of history in our everyday lives. Especially when it comes to the history of street photography.

I think there is a new chapter unfolding in the history of street photography. The technology that our cameras have would have been unimaginable even a half century ago. With our full-frame digital cameras, we can now shoot up to ISO 12,800 (with little discernible noise) and we can take thousands of photographs in just a day. Compare that to the ISO 25 film that they used to use back in the day, and the long process of developing and printing photos.

Street photography also used to be a solitary activity, with few photographers collaborating and sharing their prints with one another.

Now with social media sites like Facebook, Flickr, 500px, Google+, and many others– everyone has the opportunity to share their images with the world. And with that, tons of great work is being produced from every corner of the globe. Not only that, but many talented street photographers are now being discovered and appreciated.

What contemporary street photographers can learn from the past

I feel this is especially important when it comes to discussions in street photography about approach, style, aesthetics, and equipment. Many arguments we have nowadays seem to be quite recent and new (think about arguments in street photography over equipment, lenses, approach, style, aesthetics, etc). But in reality, many of these arguments have been going on for decades – if not for over a century.

For example, many photographers decry the use of image-editing software like Lightroom and Photoshop when it comes to post-processing their images. But photographers have been manipulating their negatives and prints since the beginning of photography.

Disclaimers for this article

A warning: this post is not comprehensive nor does it try to be. Bystander is over 400 pages long, and there is no way for me to talk about every single photographer in the history of street photography. I was very selective in choosing certain quotes and excepts from the book which I found interesting which could hopefully give you, the reader, more insight when it comes to street photography.

I also purposefully left out many influential street photographers (Garry Winogrand,Robert Frank, and many others) as I feel that I have done comprehensive articles on them already. As for other influential street photographers I have left out, it was either because I personally don’t find their work interesting enough or I plan to write a more personalized in-depth article about them in the future.

The term for “street photographer” evolves over time

For example, in the early 20th century the term for “street photographer” was someone who took your photo in the street for a fee. An excerpt from Bystander:

“To most people a street photographer is someone in times square or Piccadilly circus who will take your picture for a fee and send you the print later (or, since the adoption of the polaroid by such vendors, give it to you right on the spot).

You don’t see too many of those street photographers anymore, although you will spot some in tourist traps around the world. Some even pretend to take your photo for free, and then demand that you pay them after (the good old “bait and switch” technique).

Now we commonly understand a “street photographer” as someone who goes out to public places and takes photos (usually candidly). But there are now many debates whether or not street photography even needs to be candid or not. After all, some of the most famous images by Diane Arbus (grenade boy), Cartier-Bresson (the photo of the transvestite and two women in Spain), and William Klein (kid with a gun) weren’t candid– but with the subjects’ consent.

Even Colin Westerbeck admits that not all street photographersin history shot candidly:

In at least one prominent instance, a photographer discussed in this book – Weegee—did begin his career by playing that trade and from John Thomson to Manuel Alvarez Bravo to Diane Arbus, there are certainly others here who made a practice of soliciting subjects for impromptu portraits done on the street.

But Westerbeck still holds to the point that he feels that for the most part, street photography is done candidly:

For the most part, however, the photographers discussed in these pages have tried to work without being noticed by their subjects. They have taken pictures of people who are going abut their business unaware of the photographer’s presence. They have made candid pictures of everyday life in the street. That, at its core, is what street photography is.

But what does Westerbeck think differentiates street photography from others forms of photography– and what makes it unique? This is where things become a bit grey:

Street photography is kind of photography that tells us something crucial about the nature of the medium as a whole, about what is unique to the imagery that it produces. The combination of this instrument, a camera, and this subject matter, the street, yields a type of picture that is idiosyncratic to photography in a way that other formal portraits, pictoral landscapes, and other kinds of genre scenes are not.

Therefore you can see from the excerpts above that the term “street photographer” has evolved from a peddler taking photos of strangers on the streets (for a fee) to a flaneur taking “candid photos of everyday life in the streets”.

For this article, I am grateful to Eric Kim: erickimphotography.com/