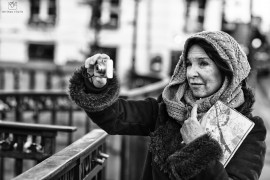 “I never shoot without using the viewfinder.” – Garry Winogrand

Personally when I started shooting street photography, I was dependent on “shooting from the hip” (2010). I was too scared to bring my camera’s viewfinder up to my eye, because I was afraid of getting “caught” of taking candid photos of strangers.

Garry Winogrand was one of the most prolific street photographers in history. He shot with a Leica M4, 28mm lens, and was known for creating layered, edgy, and head-on shots. If you go on YouTube, you can see how close he is to his subjects when shooting, and he always quickly looks through his viewfinder while shooting. This allowed him to frame properly, and capture the moments he found interesting.

“[Don’t shoot from the hip], you’ll lose control over your framing.” – Garry Winogrand

In my experience, I found that shooting from the hip was a huge crutch. The more I shot from the hip, the less confident I was as a street photographer. Not only that, but as Garry Winogrand said, I lost control over my framing. My shots would be poorly framed, skewed, and any shot that I got that looked half-decent was because of luck.

Be confident. Have faith in yourself. By not shooting from the hip, you’re signaling to the world that you’re not doing anything wrong. Also by using your viewfinder (or LCD screen), you can have better control over your framing and composition.

My suggestion: Look at your subject, smile, say “thank you” and move on.