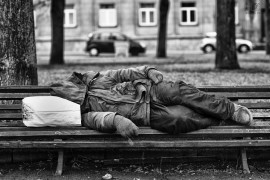 When it comes to photographing on the street, a touchy issue is always the ethics of photographing the homeless or the destitute. Should we photograph them or not?

The irony is that while the majority of street photographers were asked about the issue, they said, that never take pictures of people in distress … need to respect all people. Obviously, that is a lie, because it is difficult to find a street photographer who is neither your gallery once in portraying the homeless.

I try to avoid photographing the homeless people without their permission. I think that large and respectable work on this topic has already been introduced before, so I’m not sure that I could do something better. Thanks to street photography am already familiar with some homeless compatriot with whom I meet on the street, I always say hello, I speak briefly, and only with his consent to take a photo of them.

But at the same time, photographing the poor and destitute is an important social task. I don’t necessarily agree with photographers in the sense that you shouldn’t ever photograph anyone “in distress.” I don’t think street photography should just be all about happy moments. It should capture the full gamut of emotions from positive to negative.

I think if you photograph those in a tasteful and respectable manner – you might be doing society a favor. Instead of just taking a photograph of a homeless person for the sake of them being homeless, why not talk with them and get to know them before even bringing out your camera? Show a genuine interest in their life story and give them some attention. After all, I read that the worst thing about being homeless is not being in poverty, but feeling invisible– that everyone ignores you and doesn’t even give you a second of their time.

Follow your heart to guide you, and know that human beings come first before pictures.