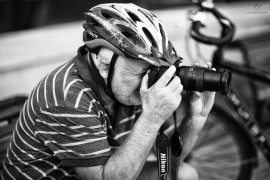 One of the hotly debated things on the internet is the use of natural light vs flash in street photography. Although famous photographers like Henri Cartier-Bresson were strictly opposed to using a flash when shooting on the streets many photographers before him were using a flash to assist their work even before him.

For example, one of the first photographers to use flash in the streets was a journalist and reformer named Jacob Riis. He first started shooting in the streets with flash powder in 1887, to create images that would help support his lectures and publications for destitute people on the streets. Westerbeck shares Riis’ approach: involvement with photography began in 1887, when he first read about the invention of flash powder, or Blitzlichtpulver, as it was called. He realized at once that it would permit him to record directly the conditions in the airless halls and windowless rooms of tenements. To obtain the flash shots, he often sneaked into a tenement or a dive, set up his equipment under cover of the semi dark, fired off one exposure, and beat a hasty retreat before the blinded subjects could recover their senses.

You can see that Riis wasn’t shooting with a flash simply to blind people (which I’m sure he often did) but rather to photograph in certain situations in which were too dark for the low-ISO films back in the day.

Another photographer who used flash quite a bit in his work was Weegee, a reporter who was infamous for covering murders in the dark of night:

“Adopting the standard press camera of his day, the Speed Graphic, and using the flashbulbs that had recently replaced the flash powder of Riis’ day, Weegee worked very much in the manner of Riis. That is, he shot in the dark, seldom being able to predict what, if anything, he would get. this reliance on blind chance to get some of his most effective pictures if obvious in those he had to take through his car windows at the scenes of accidents. He could never be sure whether the flash would bounce off the glass or go through it, or where the reflections and shadows would fall.

Weegee was reliant on using flash on the streets, because the streets were too dark at night to shoot without. However Westerbeck does mention the importance of luck and chance when shooting at night with a flash- because it is hard to predict where the shadows and reflections would look in the photograph.

For example, Westerbeck mentions a photograph taken with a flash in which Weegee was lucky enough that the flash went through the car’s windows without creating any distracting reflections. Also the way that the flash cuts off her hand creates for an interesting effect:  a woman who is herself uninjured, but has killed someone else in a collision, sits behind the wheel of her car in shock. In the picture, she reaches for a policeman with an outstretched hand that is oddly cut off by a shadow the flash has created. The severed hand serves as an image of both the car crash itself and her own disconnection from it at this moment.

Not only did Riis and Weegee shoot with a flash on the street, but other photographers like Bill Brandt and Diane Arbus who shot with a Rolleiflex camera and flashes.

In an interview with Colin Westerbeck, Joel Meyerowitz mentions how Diane Arbus used a flash for her street work:

Colin Westerbeck: “You mentioned the flash mounted on her camera. What about her use of it: how crucial to her pictures do you think it was?”

Joel Meyerowitz: Oh pretty important, really essential. She really introduced an idea that has of course been picked up by everybody, flash in daylight on the streets. She didn’t want to have too much of this situation where faces got dark because the background behind them was lighter. By employing the flash she didn’t have to manipulate people who were backlit and turn them to the sun where she would cast a shadow on them and they would be squinting into the camera. Instead, she could get them unblinking, because if you turn someone around to the sunlight, then they start screwing up their face.”

If you are shooting in the streets with a flash, have a certain purpose why you shoot street photography with a flash. Don’t do it simply for the fact of annoying people. Is it because you want a certain aesthetic look? Is it because some places are too dark to shoot without it? Do you want to saturate the colors in a photograph or add a little fill light to a subject in the dark? Have a purpose.