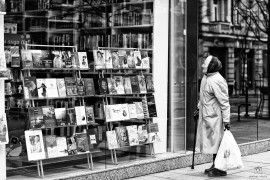 According to „Bystander“, the first book done on street photography was in 1877 by John Thomson, a Scottish photographer. He titled the book: “Street life in London”.

Interesting to note that most of the subjects in the photographs posed for him, as the “collodion” process he used (which emphasized sharpness) needed a very slow film speed. So his subjects had to stand still for a very long time, which prevented him from taking candid photos.

Takeaway point: I find it interesting how technology influences how we shoot street photography. In the early days of photography, the film was so slow (and cameras large and bulky) that it was difficult (if not impossible) in most situations to photograph people in public candidly. But as technology evolved to accommodate nimbler cameras and better speed films, the type of street photographs people started taking started evolving as well.

This makes me think much about cameras that can shoot nearly in pitch dark, with an ISO of 12,800. Or cameras that have swivel-screens that allow you to shoot from a really low angle, candidly.

So realize that the technology of the camera you are using will change your output, and don’t get stuck into the mantra of thinking the old is necessarily better than the new.